In::FORMATION: Work by Sine::apsis Experiments at the School of the Art Institute Betty Rymer Gallery, through March 1 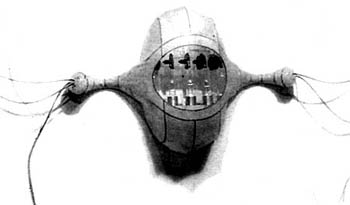 Technology-based exhibits are often problematic. Concoctions of motors, microprocessors, and video monitors always seem to be breaking down; it sometimes takes several trips to actually observe a work in operation. Also, the "tech" aspect often seems to obscure the art: glitzy effects produced by the latest interactive gimmickry can quickly seem empty. Third, the work can be seriously obscurantist, both because of the futurist rhetoric with which it's presented and because of intentional mystification as to how it works: the viewer is confronted with a modern-day religious icon, an incomprehensible entity whose whys and wherefores cannot be questioned. In the nightmare worst case, one might end up staring at a bank of video monitors displaying mind-numbing abstract patterns accompanied by a few blinking lights and moving machines near a bewildering text about how our brains are just like microprocessors; one has to wonder whether comprehending the work would require weed rather than words.

It is therefore a delight to report that there's now a wonderful exhibit of works involving motors and computers and video and microprocessors and all the other things many have come to regard with suspicion. The eight installations--plus two more that were used as part of opening-night performances--at Betty Rymer are by the members of a Chicago-based collective, Sine::apsis Experiments, plus a few invited associates. Formed only two years ago and made up of recent School of the Art Institute graduates, the group has mounted a show that addresses most of the potential objections to such work.

Many of the pieces are designed to clearly demonstrate how they function. Moreover, virtually everything was working when I made my visits. The artists, apparently recognizing the indifferent visual presentation of much technology-based work, have paid close attention to the details of their works' appearance. Many of the pieces self-consciously reconsider the artist's relationship to her work. And there are equal numbers of men and women here, though historically women have been underrepresented in technology-based art. Most of the work is gently, humorously self-effacing, which helps deflate the potential pomposity of huge agglomerations of machines. And lastly, the finest works are not devoid of mystery. 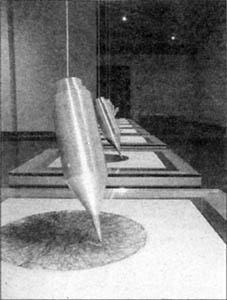 The Hive (detail) by Fernando Orellana

Perhaps the most suggestive piece, Fernando Orellana's The Hive, is in one way clear and in another elusive. On each of eight low tables a sheet of vellum lies under a heavy metal cylinder holding a ballpoint pen; the cylinder is suspended by a wire from a microprocessor-controlled mechanism attached to the ceiling that's been programmed to cause the pen to move the vellum with a mixture of determinacy and chance. The wall label tells us that each machine is drawing in its own "style": some drawings have dense networks of lines toward the center; another has a relatively open center; others have off-center focuses. It takes a week to complete a drawing, and the eight most recent finished ones are hung on the wall next to the tables.

The drawings themselves are enticing. For one thing, the lines are incredibly dense--few artists today have the patience to produce this fine a network by hand. And these spiderweblike patterns represent an ambiguous mix of intentionality and automatism: though not quite human expressions, they nevertheless clearly involve human planning. In fact one of the most intriguing aspects of the exhibit is the way the artists negotiate a middle ground between mind and machine--most of the pieces here, like The Hive, present us with a little of each. As SAIC professor James Huginin writes in the catalog essay, the artists' aim is neither to lampoon technology nor to replace human consciousness with it but to "seek a rapprochement between art and science, between the human and technology."

These artists have also achieved a balance between clarity and mystery and between high and low art. Orellana's use of vellum recalls the exquisite illuminated manuscripts of the late Middle Ages while the ballpoint pen represents the opposite extreme: few artists use it, and for good reason--looking at these drawings it's clear that a ballpoint is hard to control, depositing unpredictable little clots of ink. These might ruin a traditional drawing, but here they suggest the imperfection of materials and undercut a grand reading of the work that some of its other elements might suggest. The machines make their drawings in circles, reminding one of star maps, globes, and the abstractions of artists such as Mark Tobey, who used lines to represent both the microscopic and the cosmic. Here the use of ballpoint reminds us of the flaws in our daily tools, recalling the annoying blots that might ruin a check or make a signature seem less authoritative. 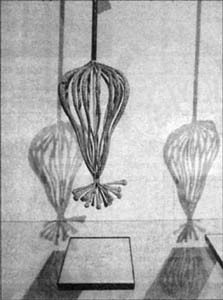 The viewer isn't given the details of how Orellana's machines were programmed, but we do see the drawings being made, and we see the results. Amy Youngs in Alchemical Bloom pays an almost obsessive attention to such clarity. At its center is a tank of liquid copper sulfate; hung from the ceiling at progressively lower levels, almost as if marching into the tank, are several bulbous structures made of copper wire--one of which is immersed in the tank's center, becoming one of three electrodes. To the right is a machine showing a reading of the outdoor temperature; a motor attached to it, the labels tell us, changes the voltage delivered to the tank as the temperature changes. Large wires with clips--like jumper cables--connect a voltage box to the electrodes in the tank. The negative voltage in the bulbous wire structure attracts the positively charged metal ions in the liquid, which attach to it. Hung on a wall near the tank are several wire structures encrusted with hundreds of tiny copper beads, the result of past weeks' electroplating.

Youngs's presentation of these details foregrounds the nature of the process. Surely there are smaller and more efficient ways of sending electricity to the tank than with the large motor and giant leads; Youngs has gone for maximum visibility, demystifying artists' "secret" processes. And by tying the voltage (and thus the thickness of the deposits) to the outdoor temperature, she introduces a variable she can't control--as do most of these works, but hers is an element from nature, and the copper deposits resemble undersea encrustations. Indeed, several artists here seek a rapprochement between technology and nature.

The attention paid to small details as well as overall design is also crucial to the success of the works. Lauren Was's Nineteen consists of 19 magnetized metal pieces about three-and-a-half inches long--"helmets," as she calls them--darting about on a wooden platform. Microprocessor-controlled magnets underneath move the helmets around in unpredictable patterns; viewers are also invited to rearrange them and watch a new pattern evolve. The wood is an elegant parquet recalling the floors of upper-class homes--where small versions of such "useless" but elegant games in fact might be found. Looking like some species of headless turtle, the helmets bump about, one occasionally mounting another so that they skitter along together, innocently and obscenely at once.

Yet Nineteen also manages to comment on the artist's ancient role as image maker. Here the image changes over time in a curious mix of movement and stillness: a few helmets move, then everything stops, then there's movement again. As in The Hive, the movements are not completely random; the helmets tend to gather near the center, and the greatest degree of movement is there. Positioned between moving and still arrangements and between intentional and random patterns, Was's piece tweaks the idea that images can represent some absolute truth.

Such tweaking can also be found in Sabrina Raaf's The Unstoppable Hum, whose central element is a symmetrical structure of thin rubber stretched over a metal frame with an opening at the center, resembling a proscenium stage with the curtains open. Mounted a bit above eye level on the wall, it also seems to refer to altarpieces with its horizontal arms and almost pompous presentation. But what we see inside is no holy image but five air-blowing machines pointed at glass bottles holding various amounts of water. The blowing is somehow triggered by noise in the gallery, in ways that I couldn't quite figure out--but most pieces here retain some mystery, often by leaving some aspect of their process unexplained. And one can clearly see that the wonderfully sensuous, palpably muscular sound is produced by the air moving over the bottles' mouths.

Daniel Wayne Miller's Colony is a giant image-making machine that also pokes fun at high art. Three huge "robot loader mechanisms" move above a ten-by-ten-foot circular platform dropping green foam pieces, wax, or a soil-and-seed mix--"struggl[ing] to co-create a surface," as Huginin writes in the catalog. A hose occasionally sprays water on the mess. The movement of each loader and the timing of its deposits are somewhat random; new patterns are constantly being created. The green foam looks like Styrofoam but is in fact corn-based and biodegradable: the older foam pieces in Colony are much smaller than the new ones, and some seem to have liquefied, turning into stains. Meanwhile the wax forms towers, and tiny grasses grow in the soil. Looking a bit like a construction site, the piece does recall, in Huginin's words, "earthmovers, despoiled land, and systems run amuck." Its mounds, stains, and general chaos are a world apart from ideals of aesthetic perfection. 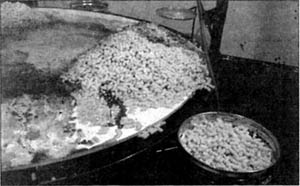 Colony is faintly reminiscent of the drip paintings of Jackson Pollock, which he made by spreading his canvases on the floor. But watching one of Miller's loaders move slowly and portentously, then drop a few foam pieces, one feels that he's debunking the idea that the individual's inspiration and mysterious process will lead to the sublime. And Miller may be critiquing more than high art--there's a certain hubris too in what some would count as our failures: congested highways, abandoned construction sites, urban ruins, "perfect" but soulless subdivisions.

Sine::apsis Experiments declares in a manifesto on its Web site (www.sine.org), "We are comfortable with the fact that by using...machines and digital technology...our works will not be eternal....We thus accept our own mortality. This means not only the acceptance of the eventual degeneration of our own bodies but also the eventual dismantling of our works." Indeed, these pieces might last only a few years, but in fact no artwork is truly eternal. The old masters in the Art Institute are decaying too, though far more slowly than Miller's biodegradable foam. And last time I looked, plants much larger than Miller's blades of grass were growing out of the stone walls of the great cathedral at Chartres.